Not Just Hoops' My Daughter's Keeper program participants and upcoming participants had the opportunity of attending the The Michelle Obama's Event at the Barclay Center. Tickets were donated by the DBNA Foundation. 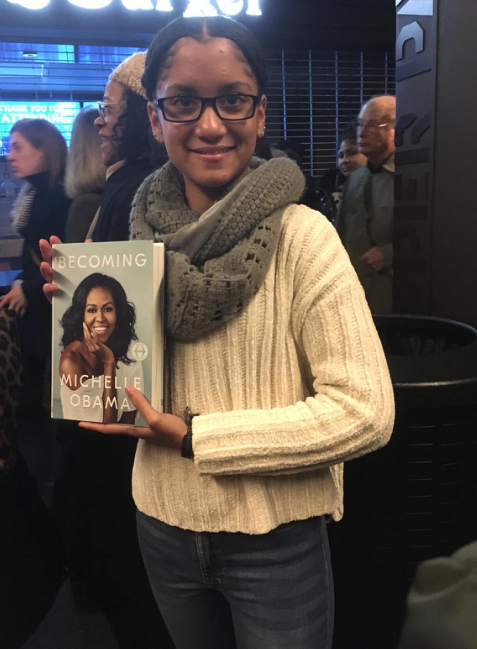 As I entered the Barclay Center, I felt a rush of excitement and anxiousness in my body. Before Michelle Obama came on stage to talk, they were playing a documentary showcasing major life events such as: growing up in Chicago, meeting Barack Obama for the first time, bonding with her children, taking pictures with Former President Bush, allowing children from all over the world to visit the White House and when she became the First Lady.

As she entered and started talking, I felt chills in my body as I imagined her having a one on one conversation with me. She talked about her experience as a Black girl in Chicago and the adversities she experienced. As Mrs. Obama spoke, I became inspired as she discussed the details in her new book "Becoming."

When she attended Princeton University, someone told her she "wouldn’t make it because of her race". Determined to prove them wrong she set high expectations for herself and became a Lawyer, Teacher, and Writer just to name a few. I made multiple connects to what Mrs. Obama said because I have experienced similar racial remarks and I do know as I attend a University next year, racial remarks like such will not stop me from pursuing my degree.

Mrs. Obama talked about her relationship with her husband, the Former President, Barack Obama, and their children when they lived at the White House. I loved when Mrs. Obama explained that she wanted to keep a somewhat normal and humble life at the White House. Mr. and Mrs. Obama continued to have their daughters’ complete chores no matter the help they got from the staff.

Attending Mrs. Obama's book signing was truly a memorable experience I will never forget. Without the help of the My Daughter's Keeper Program, I wouldn’t had this opportunity to learn and now have an amazing story to tell. 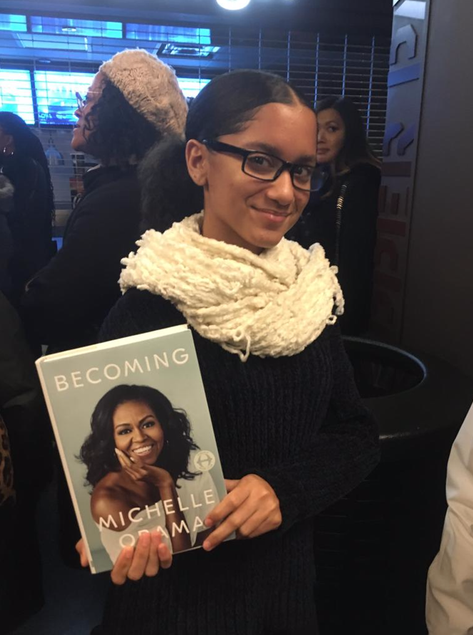 While we awaited Michelle Obama, a documentary was being shown of her life in Chicago, her marriage to Barack Obama, as First Lady and a mother of two daughters. As she entered, I felt overwhelmed and felt I was only a few rows away from the former First Lady. She talked about her experiences growing up on the South Side of Chicago, living with her mother, disabled father, and brother. Mrs. Obama worked hard to achieve her goals even though she was faced with adversities, she made sure that college was on the top of her list. Mrs. Obama also remembered someone telling her that she wouldn’t make it at Princeton University but she proved them wrong, and with her determination and persistence she obtained a law degree. At this point, I felt motivated and encouraged as a freshman entering college next year and the challenges, I know I'll meet.

Mrs. Obama also talked about her marriage to Barack Obama, her other job as a wife and mother, balancing her White House duties and spending time with her family (Barack and the children). She mentioned that her daughters were given chores even though they were at the White House surrounded by household staff. This is one way she wanted to help them become better young ladies. She was an advocate for healthy eating especially to children. I admired her good qualities and family values.

I am thankful for the opportunity given to me by My Daughters Keepers program as this was a truly memorable day and a story I can share with family and friends. 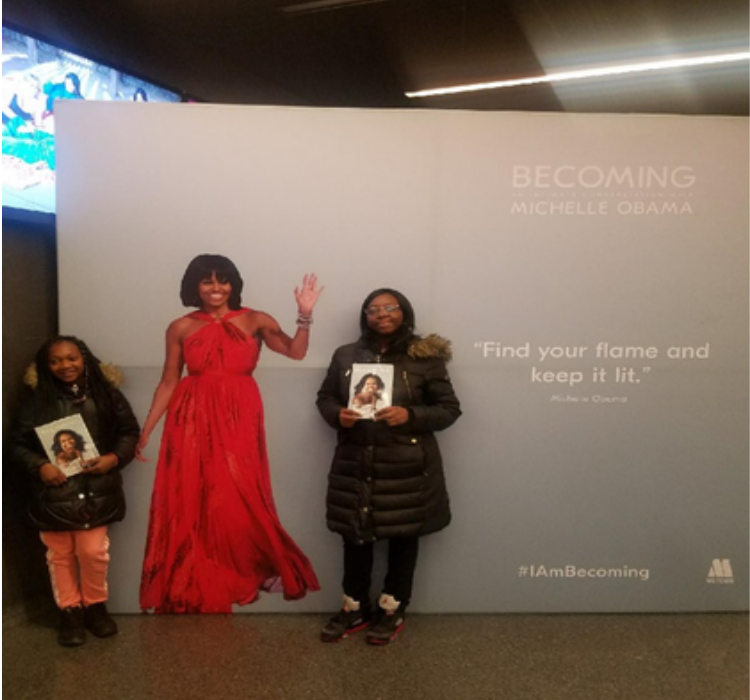 I have unlimited possibilities.-
- Malaijah Banks 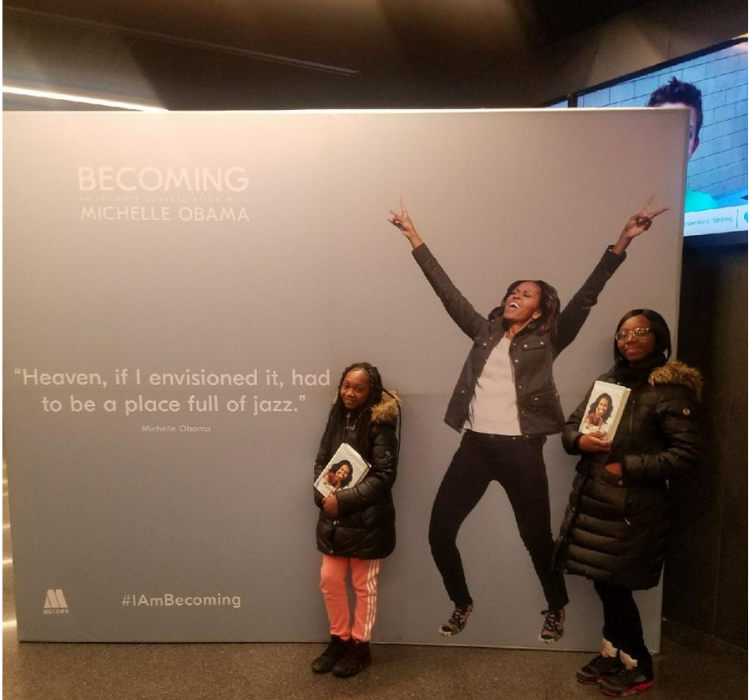 "I may be small but I have big dreams".
- Nickayla Richardson

What we mostly enjoyed about the event was Michelle Obama’s stories. The stories were super inspirational yet funny. It made all the lessons she conveyed seem so clear and simple. Her way with words was incredible, and she was so full of emotion. We love to one day be able to publicly speak like her with confidence, pride and our own fun twist. 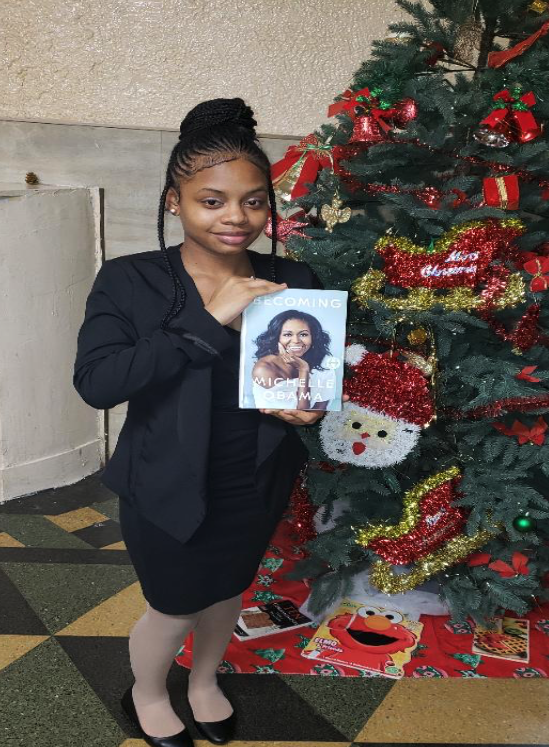 My thoughts on Michelle Obama’s Event

Getting to see Michelle Obama and hear more about her personal life was an exciting and memorable moment. Throughout the night, Mrs. Obama discussed many things but the thing that stood out most for me was her characteristic of “determination”.

Through Michelle Obama’s discussion, I have learned that not only determination but perseverance has gotten her where she is today. For example, when applying to college, the counselor doubted her and said she would not be good enough for Princeton but Michelle did not let that stop her. After getting into Princeton, graduating and completing law school, Michelle Obama became one of the most successful women of our time.

In closing, if you really want something, do not let anyone discourage you. Chase your dreams no matter what because everyone is full of potential.